I held back on this post for a few weeks because I went to Las Iguanas two Tuesdays in a row for various birthday celebrations. The last time I went I did the standard main and dessert thing but this time I wanted to try out what tapas they had to offer, and luckily I had a friend that had the same thought. I said in my last post that their choice of main is very limited and all a bit same-y but the same cannot be said for the starter/tapas side of the menu. There is such a variety and it’s just the right size so there’s plenty to choose from but you’re not over-faced. We decided to go for three in the end, nachos with chilli, empanadas with chicken???, the little pastry things with lamb and a side of curly fries.

Let’s start with the nachos. They were incredible. It was a nice large portion that we still managed to polish off between the two of us and everything was in proportion. It came with sour cream, cheese, salsa and guacamole and we added the chilli for something like another £2. The chilli was really nice and I think that if I was just having that as a sharing starter then I’d have it again but in this situation the chilli wasn’t a necessity, but it was a nice little addition. The nachos themselves were large and crunchy, well salted and overall just super tasty. 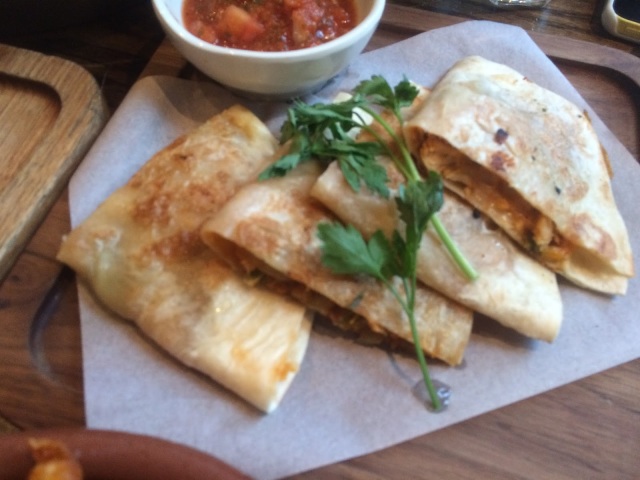 The spicy chicken quesadillas were very tasty but I think that it may have been my least favourite dish of the bunch. Not to say that it wasn’t still good but compared to the other things that we had, it just lagged behind a little. The inside flavour was very good but overall I found it a little bread-y with not much filling. The portion size however was great as there were four meaning both of us got two each, which isn’t too shabby.

These little pastries of wonder were seriously out of this world. They were the tender lamb empanadas and on paper to me it’s like, yeah okay sounds alright, but they were so amazing that I think this was my favourite of all the dishes. The lamb tasted like lamb, obviously, and with the cranberry sauce it was very wintery but it still had a very fresh flavour. The pastry was thin and crisp but sturdy enough to be able to hold in all of the wonderful goodness that was inside. I can’t explain how good this was so you’re just going to have to go and try it for yourself.

These curly fries were incredible. I mentioned them in my last Las Iguanas post as they came as a side with my meal and I’d say this time they were even better. They came with an aioli dip (which I also had last time) and neither of us two tapas sharers could get enough. It was creamy and garlic-y and writing about it now is making me want to eat a whole bucket of it. They weren’t a bad price either and the portion size was pretty much the same as the other actual dishes.

Overall everything was delicious and the tapas definitely wins outright in this food establishment!