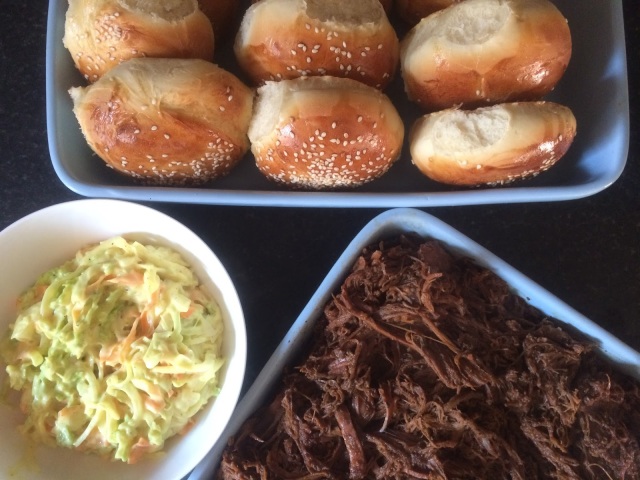 This week’s ‘how to’ is slightly different as we’re going down the baking route, yay food! This last weekend me and my dad decided to have a go at making a Tom Kerridge recipe from his Best Ever Dishes book. Although I helped with most of the elements I was put in charge of the bread. We don’t normally make bread but it was part of the recipe and I wanted to go for the full effect instead of just buying some bread buns for the supermarket. It was quite a bit of work but so so so worth it! They’re sweet but not overwhelming and super duper soft. I’ve never been so impressed with myself. it’s definitely made it to my list of things I’m proud of (which includes the speed I watched PLL in so not a hard list to join). So without further ado, here is the recipe, which things that I discovered while making it thrown in along the way.

Baking//
Place the flour, yeast, salt and sugar into a bowl, making sure that the salt and the yeast are on separate sides on the bowl not touching. Warm the milk and butter in a pan on a low heat, just enough so that the butter just melts. Add the warm mixture to the dry mixture, I did it a little at a time, and bring it together, I used a fork. Once it comes together knead for 5-8 minutes until the dough is shiny. This is where I’d say it takes a lot longer. When the dough first comes together it is very sticky and takes around 15 minutes to get it to the point where you can properly knead it. When you think it’s done do it for a bit longer and just persevere because it will be worth it in the end. Then place the dough in a clean bowl, cover with cling film and put in a warm place until it has doubled in size. My house was very cold on that day and because our microwave is above our oven I put it in there because it was pretty warm but by a radiator would be great. It should take about an hour.
Once it has doubled in size knock the air out and knead it again, I did it for about ten minutes. Lightly dust a surface with flour and begin to tear off pieces of dough and roll them into balls. The recipe (which makes 12 rolls) says they should each weigh around 80g however I found that it was more like 90g each. Grease a baking sheet with the oil and place the rolls on a sheet, slightly spaced apart. Leave them to prove on the tray for about an hour, until the rolls nudge into each other slightly. I put mine somewhere out of the sun in case they proved to quickly but I’d recommend putting them in a very warm place.
Once proved, preheat the oven to 220C and brush the top of the rolls with the egg to make them nice and shiny, it definitely makes all the difference. Sprinkle the tops with sesame seeds and salt before baking for 12-15 minutes or until golden. Finally cool on a wire rack.
I’m definitely going to making these again. Although with the proving time it takes quite a while but it is worth it. I love them so much and it’s made me want to venture out more into the world of bread.